Crossing the Rapido: A Tragedy of World War II

The crossing of the Rapido River in Italy, in the shadow of the monastery atop Monte Cassino, was “one of the most colossal blunders of World War II,” leading to failure, outrage, unnecessary death, and a congressional investigation of US Army General Mark Clark. In January 1944, the Texas 36th Division-the T-Patchers-was ordered across the river on a mission they knew could not succeed: to beat the fast-flowing current in the dark of night in the bitter cold.

But first they had to transport their boats and mobile bridges through German minefields and withering artillery and mortar fire just to reach the riverbank. Boats sank; bridges blew up. Men in full field gear were borne away by the water never to be seen again. Men vanished in massive explosions, or lingered in pain for many hours before help arrived.

The few who crossed the Rapido found one of the strongest, most forbidding German defensive lines. The assault was a fiasco. Men died by the hundreds and then the stunned survivors were ordered to renew the attack, this time in daylight.

“We were being sacrificed,” a battle-weary sergeant said. “We couldn’t win.” Of the 4000 men who attempted the crossing, more than half did not return. And to this day the survivors have not forgotten the Rapido or the name of the officer who sent them there.

Duane Schultz recounts this operation from the viewpoints of the survivors, those who made it back to safety to later record their memories. In the Shadow of Monte Cassino: Crossing the Rapido tells the story of the courageous men who fought in this small but significant corner of the Italian campaign, and the folly of those who led them. The soldiers at the Rapido did what their ancestors had done at places like Gettysburg and Fredericksburg, Bataan and Normandy, Korea and Vietnam, and more recently in Iraq and Afghanistan: serve their country and, in the process, help to make and define its history.

Available in hardcover from Westholme Publishing, 2010.

A powerful, poignant and unvarnished account of the senseless carnage of the Second World War.

As author Duane Schultz makes starkly clear in this well-researched work, the soldiers and officers sent as T-Patch [Texas 36th Division] replacements came from across America with insufficient training and little sense of what they were supposed to do. Many of them would not live long enough to find out. Schultz details the disastrous operation from the perspectives of Gen. Fred L. Walker, the T-Patchers’ respected commander, as well as the German’s Rapido commander, and [Gen. Mark] Clark, Walker’s superior, who was ultimately exonerated by the Army.

The book also takes the reader into the horrors of combat, as soldiers, medics, officers, and Army engineers try desperately to carry out impossible orders. At times, Crossing the Rapido is unnerving reading. It also is World War II history writing at its best.

The failure of the 36th Texas National Guard Division’s attempted crossing of Italy’s Rapido River in January 1944 remains one of the black spots of America’s WWII effort. The division’s numbers already decimated from earlier battles on mountainous terrain, the dead replaced by rookies, and with the river at its most impassable, Gen. Mark Clark still ordered the division to cross. Nearly half the troops were killed, wounded, captured, or disappeared trying to cross the river. The 36th’s members had enough influence to compel a postwar congressional investigation, but the controversies over the disaster continue. Schultz, a psychologist who also writes solid military history, depends on interviews and memoirs to convey stories of individual courage and fear. He presents the Rapido crossing as part of an experience that changed lives utterly. This book is a grim reminder that the way back for men left wounded in both mind and body was no less cruel than the way forward, across the Rapido.

Well written, superbly documented, this fine book will appeal to military history enthusiasts of all ages.

If you liked Into the Fire (also by Duane Schultz), you’ll like this one too. Crossing the Rapido is the story of a Texas National Guard division (the 36th or T-Patchers) federalized into national service during WWII and their epic story fighting in Italy. Specifically, the story concentrates on their disasterous attempt to cross the Rapido River as part of a larger plan to advance the Allied armies to Rome. Shultz does a wonderful job of story telling and sets the stage for the disaster by exposing us to the key personalities involved including Army, Corps and the Division commanders, Winston Churchill (and his role in plan) as well as the officers and enlisted men of the 36th who did the fighting in the cold, wet and mud of the Italian front. Shultz also provides some interesting perspectives from others who were present with the 36th including famed Ernie Pyle and John Huston who filmed a documentary on one the 36th’s fight at San Pietro. We also get exposed to the T-Patcher’s bapitism of fire at Salerno and some of the critical fighting and combat experiences that led up to the Rapido battle and that shaped the division. The human story is compelling and I was eager to get to each succeeding chapter. Shultz’s writing style is engaging and the book flows as swiftly as the Rapido river apparently did back in the winter of 1944. Little is written on the Italian campaign (as compared the the endless volumes on Normandy, the Bulge, the Pacific, etc.) and this book does the US soldiers who fought there justice. I strongly recommend this book. 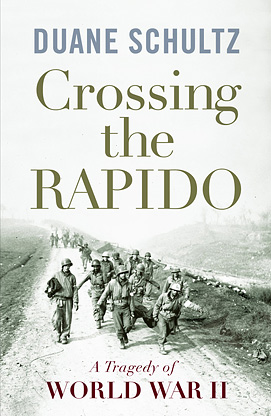 The Last Battle Station: The Story of the USS Houston
St. Martin’s Press, 1985

Into the Fire: Ploesti: The Most Fateful Mission of World War II
Westholme Publishing, 2007