I wrote my first war stories when I was eight years old, but nobody would publish them so I became a psychologist instead. I’m not exactly sure why I did, but I liked it and still do. I grew up in Baltimore and worked summers in a steel mill to pay for college at Johns Hopkins University. Then I went to the coldest place I’d ever been – Syracuse, New York – to earn a master’s degree at Syracuse University. I spent a year working on a missile system for a defense contractor and six months of active duty in the US Army. After that I worked for a year at a private think tank located in the Pentagon and quickly realized that I wanted a career in college teaching, which meant that I would need a doctoral degree. I chose American University in Washington, D.C., where I spent 3 years. I met my future wife and earned my Ph.D.

I started teaching at Mary Washington College, in Fredericksburg, Virginia, which was then the women’s branch of the University of Virginia. Our house was a half-mile from a major Civil War battle site. And I started writing again – journal articles and books in psychology. This time they got published so I wrote more, and more, and they got published too. By that time I was a full professor at the University of North Carolina at Charlotte.

We went to the Netherlands for a semester to teach at a Dutch university and it was there, in a place even colder than Syracuse, that I discovered a basic truth. I wanted to write war stories just like I did when I was a kid. And so I left the academic world and wrote my first book-length war story, on the Sand Creek massacre of Cheyenne Indians in 1864. And guess what? Nobody would publish it!

So I wrote another one, this time on the siege of Wake Island at the beginning of World War II, and I sent it out expecting great things. Well, 19 publishers turned it down, one at a time, each taking several months to respond. Was I discouraged? Who me? You bet. But the 20th publisher, St. Martin’s Press, bought it and I was off and rolling on a string of books about World War II, the Civil War, and the Indian wars including that first one about Sand Creek, which finally got published 20 years later. I have just completed a book about the Italian campaign in 1943. And I plan to keep writing, whether my work is published in traditional printed book form or online or on a blog, in whatever form people want to read them.

So if you can’t get your book published, remember the three basic rules of the game: (1) keep writing, (2) keep writing, and (3) keep writing. Oh yes, there’s a fourth rule too: Don’t throw away anything you’ve written. You never know. Good luck – and let me hear from you with your comments or suggestions, and even criticisms of the material on the “In Progress” page. 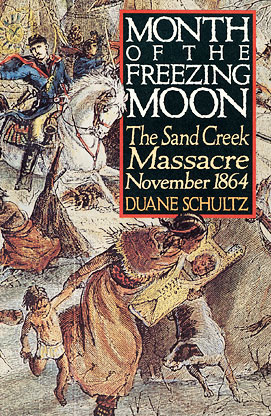